Sorry to be so absent lately.  I have started a new job and it is taking lots of brain power to learn it, so when I get home I don't really want to be on the computer at all.

I have been trying to get a little crochet in as well.  It is nice and realxing.  You should try this project.  Very Easy!
I made a toque as a present. :)  I saw Stephanie make a Ribbed pompom beanie and remembered that I had made a few of these in the past.  I decided for my Christmas exchange with my friends I would make one as a present.  I made it in white: 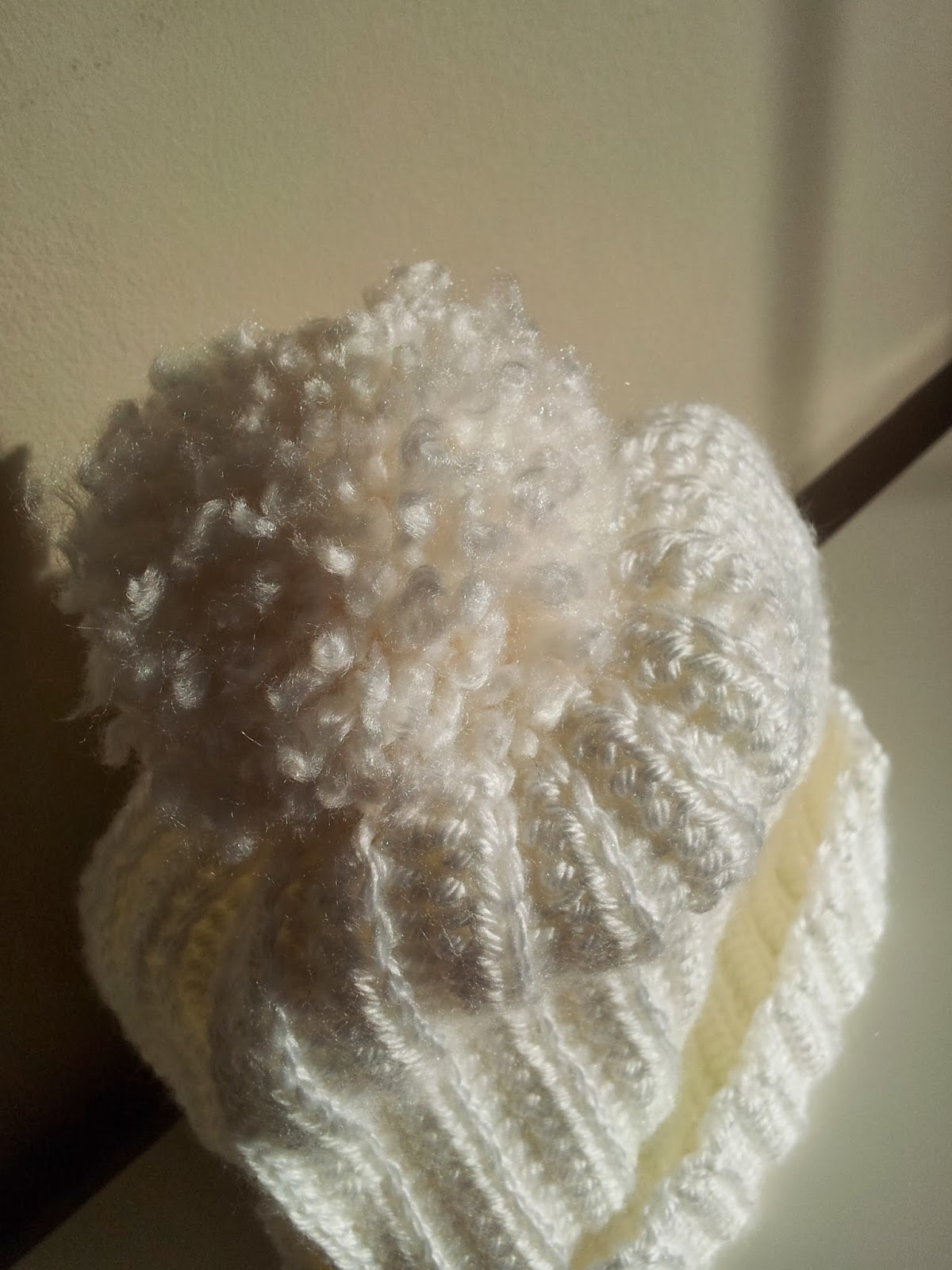 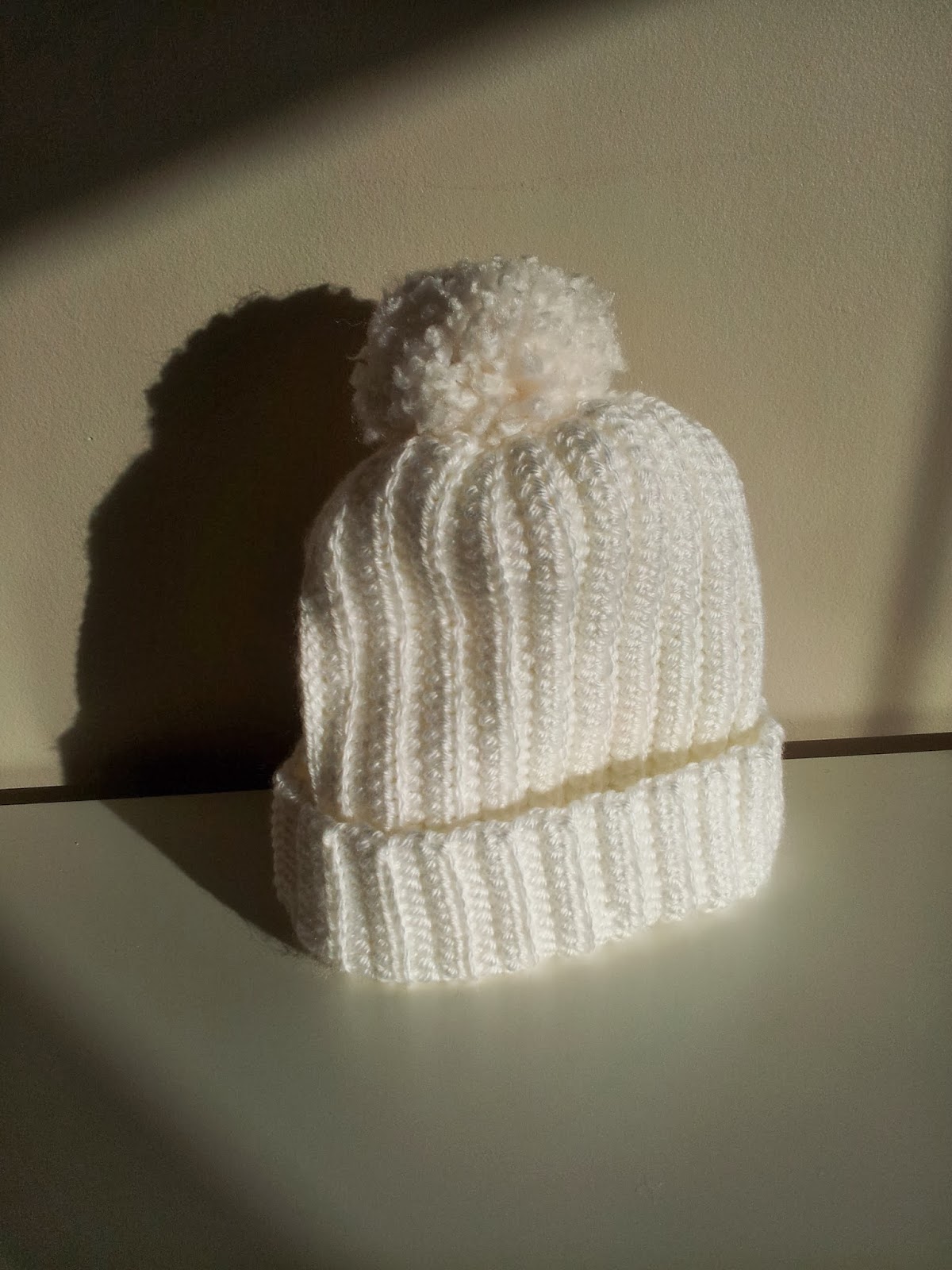 I also made one that was a royal blue for my mom.
(Sorry, forgot to take a picture of that one)
I just joined a mystery crochet along so I will tell you all about that soon.
Posted by Unknown 1 comment:
Email ThisBlogThis!Share to TwitterShare to FacebookShare to Pinterest
Labels: christmas present, Hooked on Yarn Cake, pom pom, ribbed beanie, royal blue, Toque, white, Yarn

by Begnaud: Giveaway winner: Thank you very much to everyone that entered my first giveaway! And the winners are... First place: Court B ...
I won a blog giveaway from Danielle at by Begnaud!  You can read all about what was offered in the giveaway in this post.  I was really excited to win because I really like her taxidermy collection of crochet.  Danielle has an Etsy page too.

You should check it out.

She has a wide range of really cute crochet items up there.
Once I receive my items I will take some fun pictures of them and let you see what I picked.
Posted by Unknown 1 comment:
Email ThisBlogThis!Share to TwitterShare to FacebookShare to Pinterest
Labels: by Begnaud, cactus, Crochet, Etsy, giveaway, Hooked on Yarn Cake, taxidermy collection, winner

How I got to my Blogiversary!

I can't believe it's been one year since my first post (November 14). Lots has happened in the last year.
1. As you may have noticed... I started a Blog (Over 50 posts and still having fun)
2. My husband and I sold our first home
3. We moved to our second home
4. We have had some great summer pool parties
5. I have biked home from work many times (15km/55mins)
6. Coincidentally I leave my first job today.  I will be starting a new job at a new law firm on Monday.
Thank you for following my written adventures!  I look forward to entertaining you in the next year and beyond. If you have any ideas or things you would like me to blog about please let me know by a comment below or you can email me at:  courtcreation@live.com.  Also if you would like any more information on anything you see in my blog please get in touch.

Remember my earlier post about a card I made for the wedding I attended in late September?  Well that card was a part of a challenge called the November Challenge put on by PJ Challenge.  A way to inspire paper crafters to keep motivated to make projects.  I am not a true paper crafter.  I just like do a little here and there.
Sherry and I decided to tackle this challenge together.  She helped with the pieces I needed as a collaborative kit for the card... since I don't have a Cricut machine.  So my part was to make a card for the wedding.  Then Sherry would use the leftovers and make other projects to complete the challenge.
Here is the inspiration for the card. The invitation. (Edited to protect the newlywed's privacy) 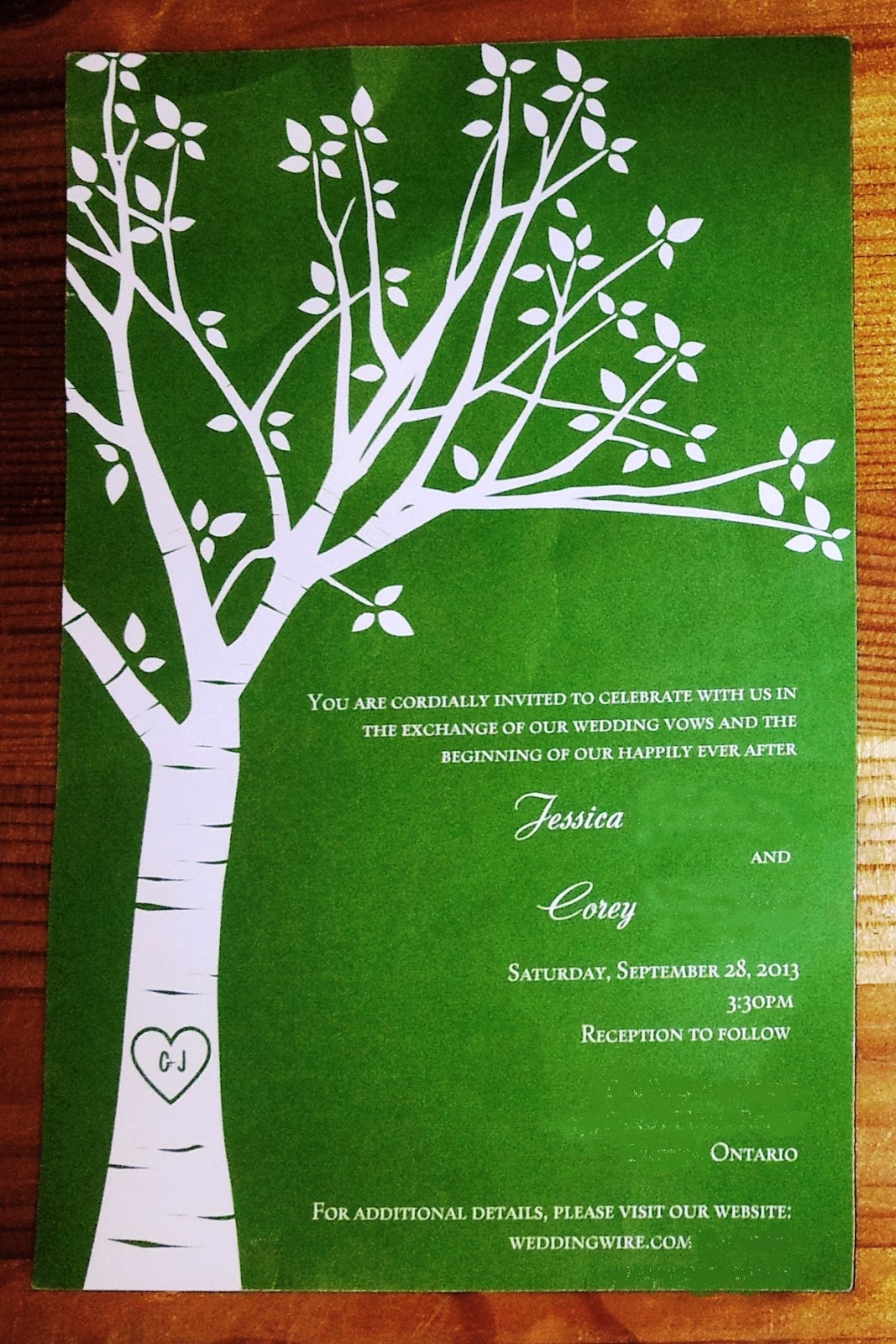 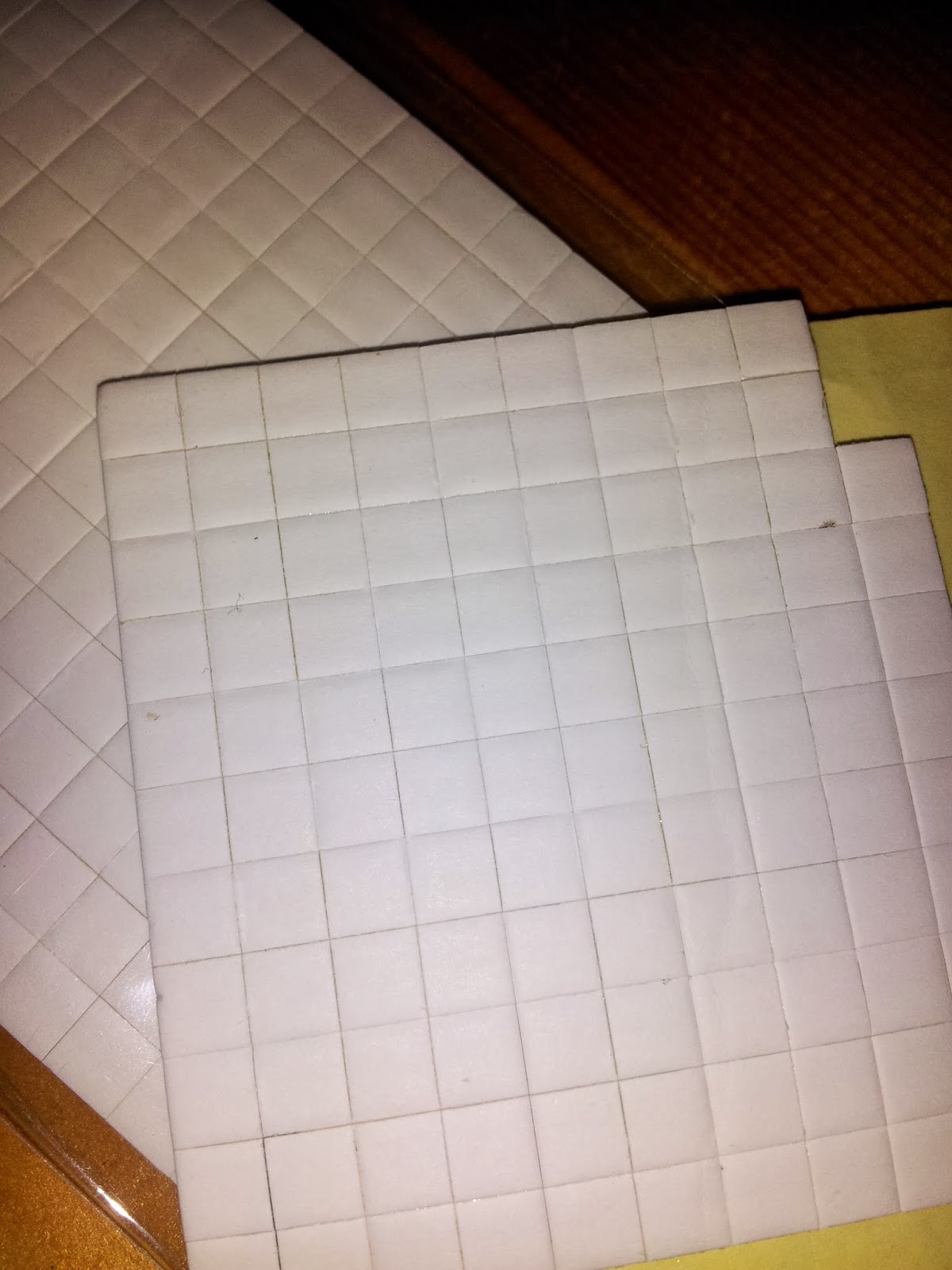 Pop-up dots were very important part of this card construction.
The couple has a cute dog.  So I wanted to use a dog in the card to make it more personal. 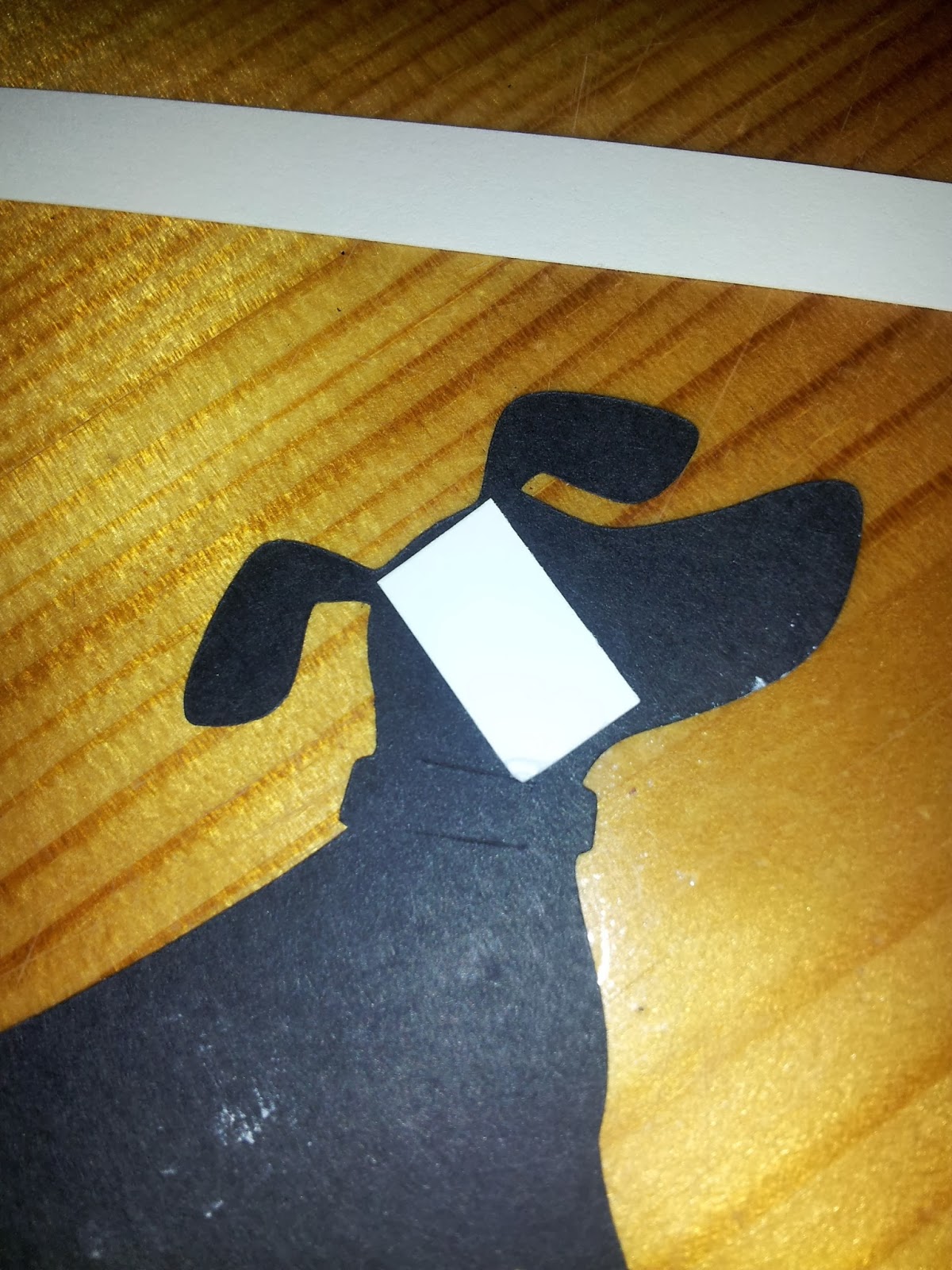 I attached a small piece of white card stock on the back to give the dog some eyes. 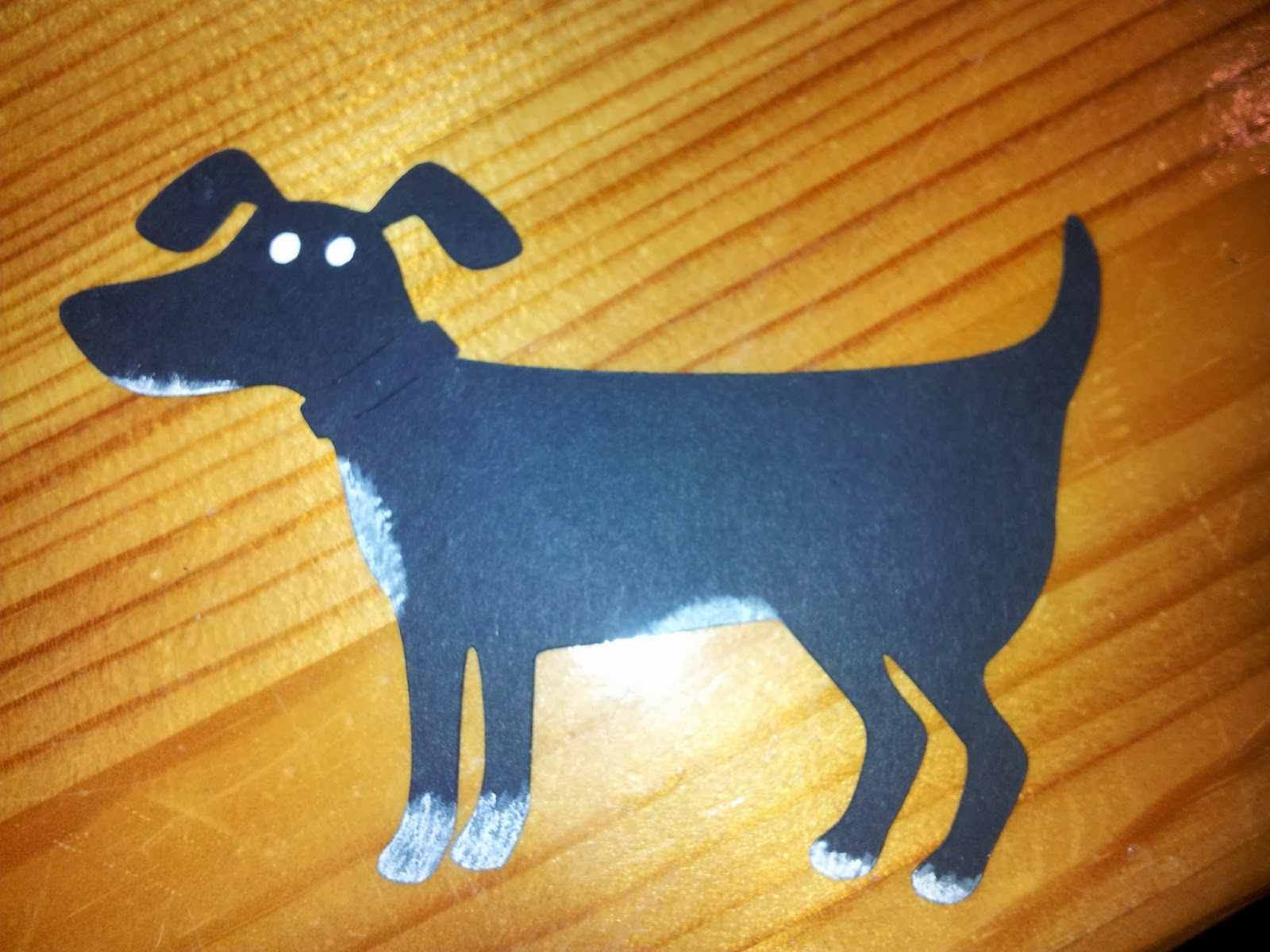 Conte was the chalk of choice.  I actually had a few leftover pieces of it from high school. It was nice to look at a picture of the couple's dog and add some white to make him similar to their dog. 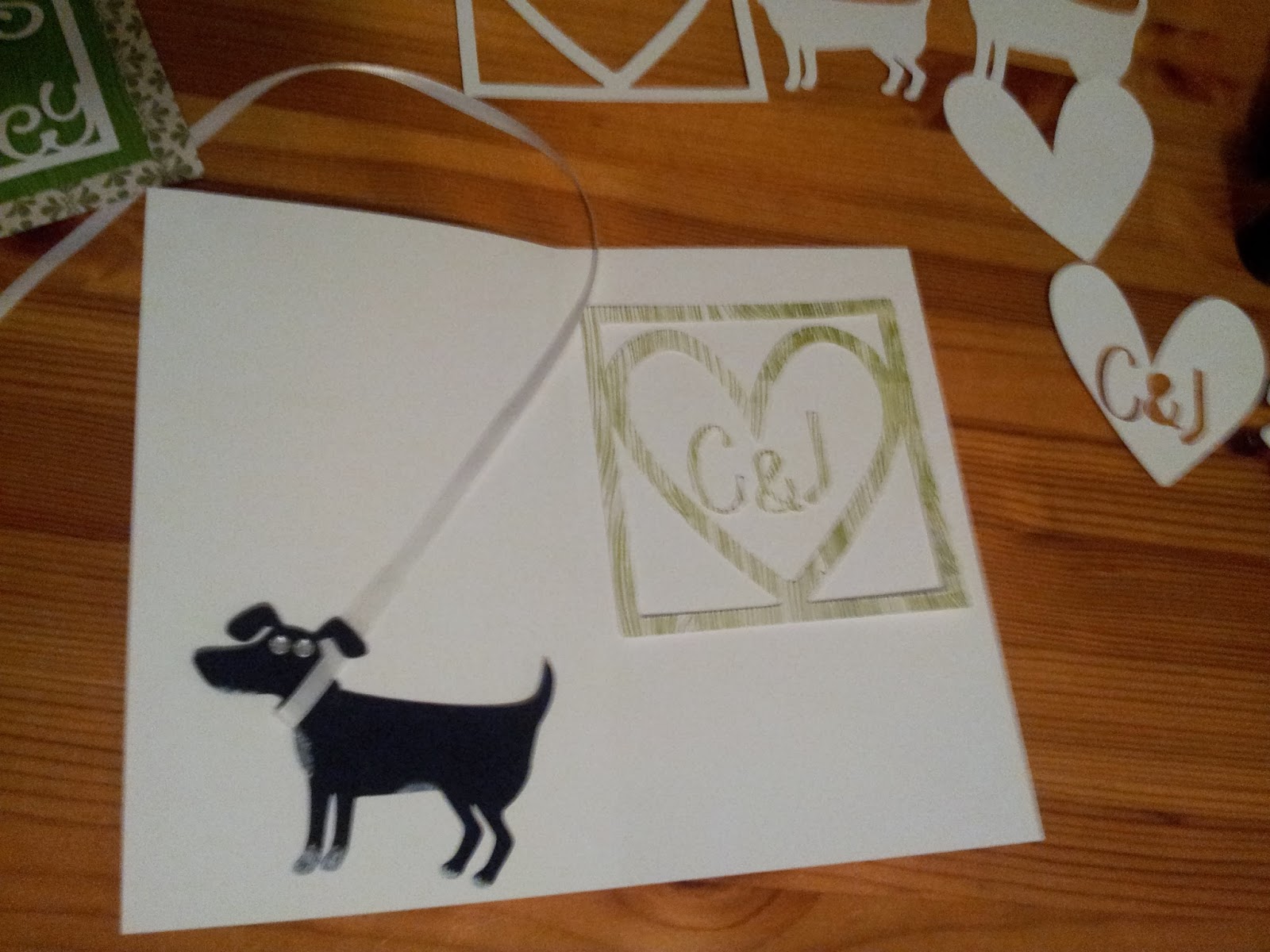 Here I am fiddling with the inside of the card trying to figure out placement and what I want to see inside the card.
Other attempts at the inside. 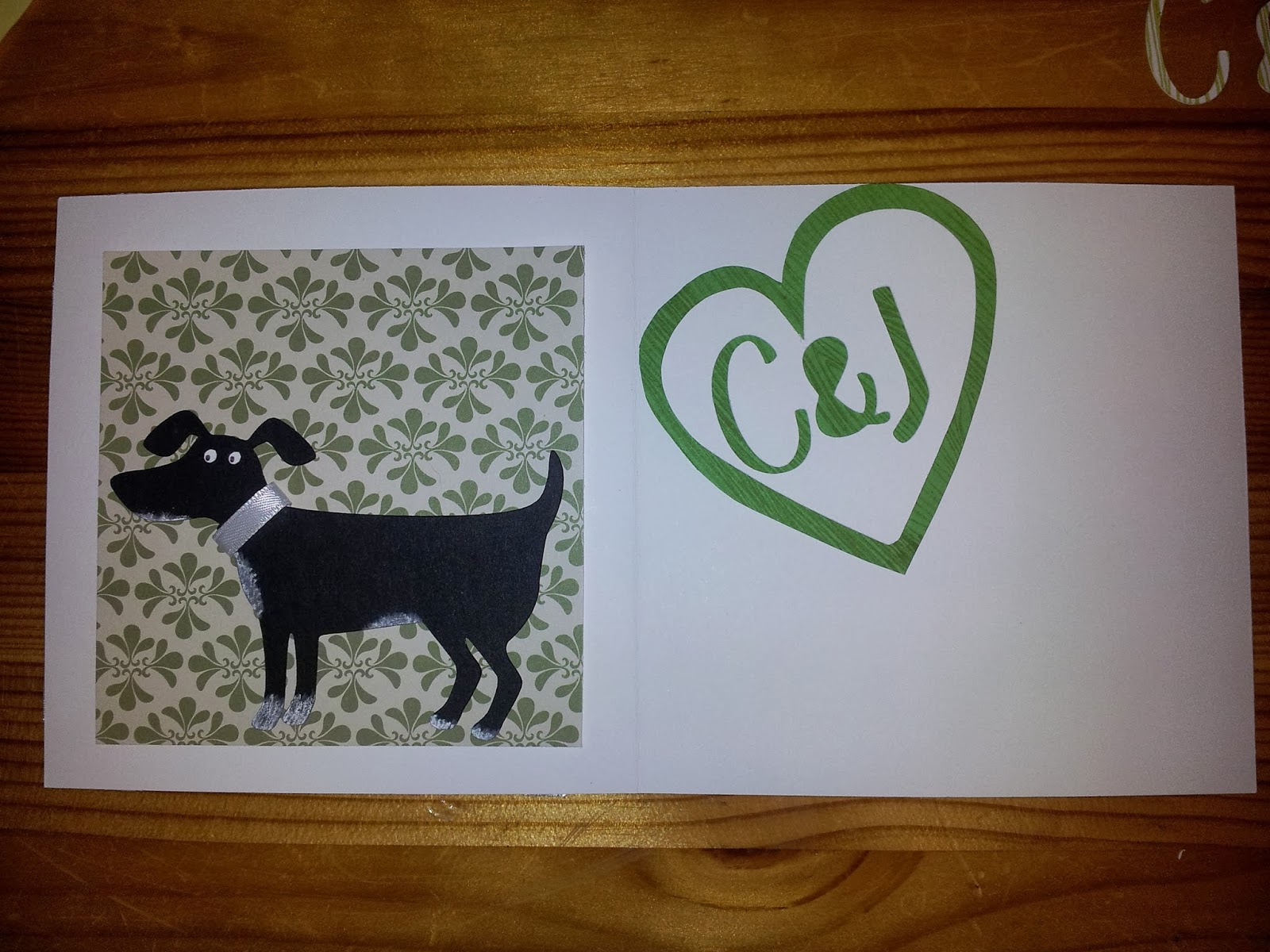 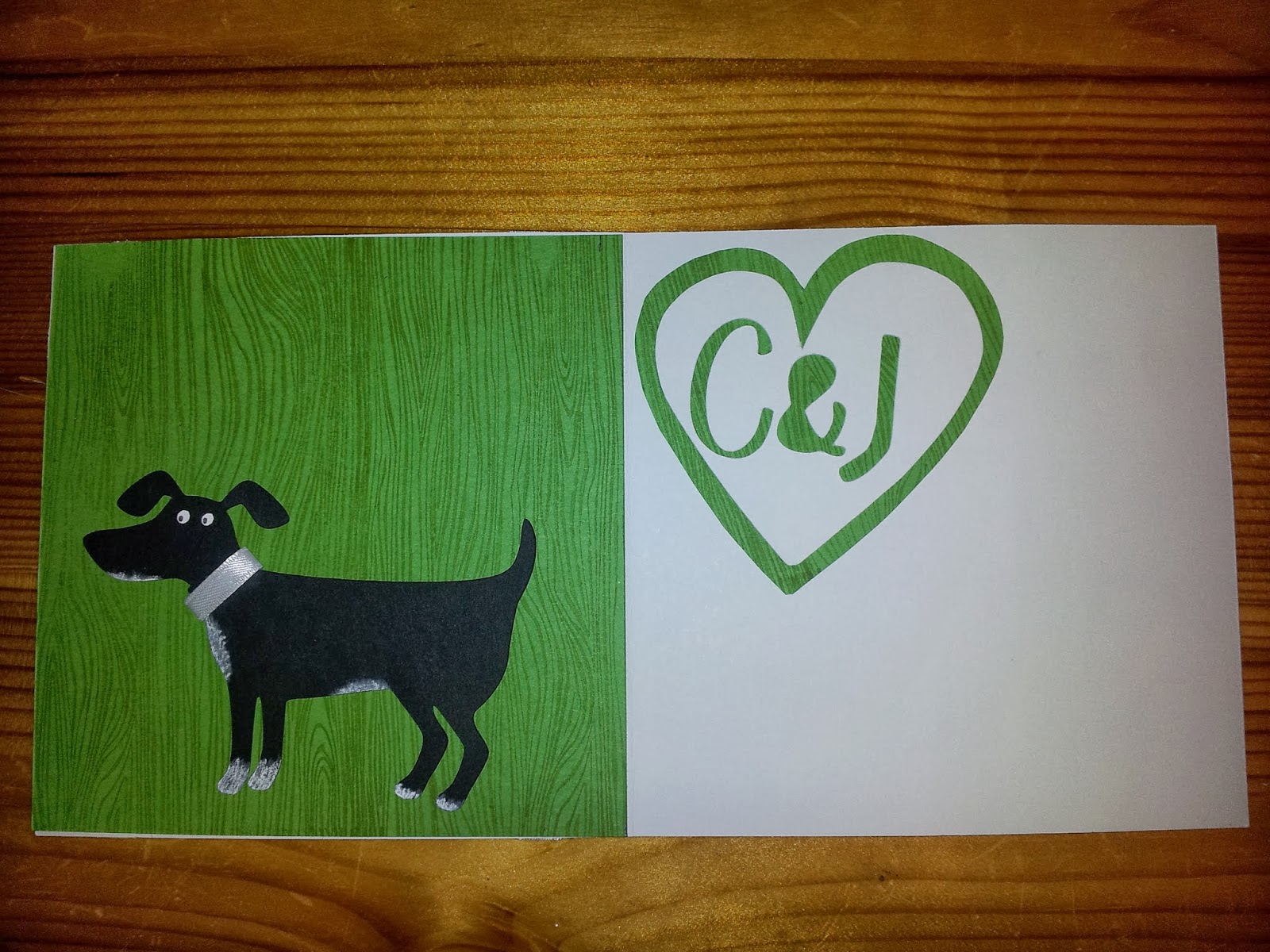 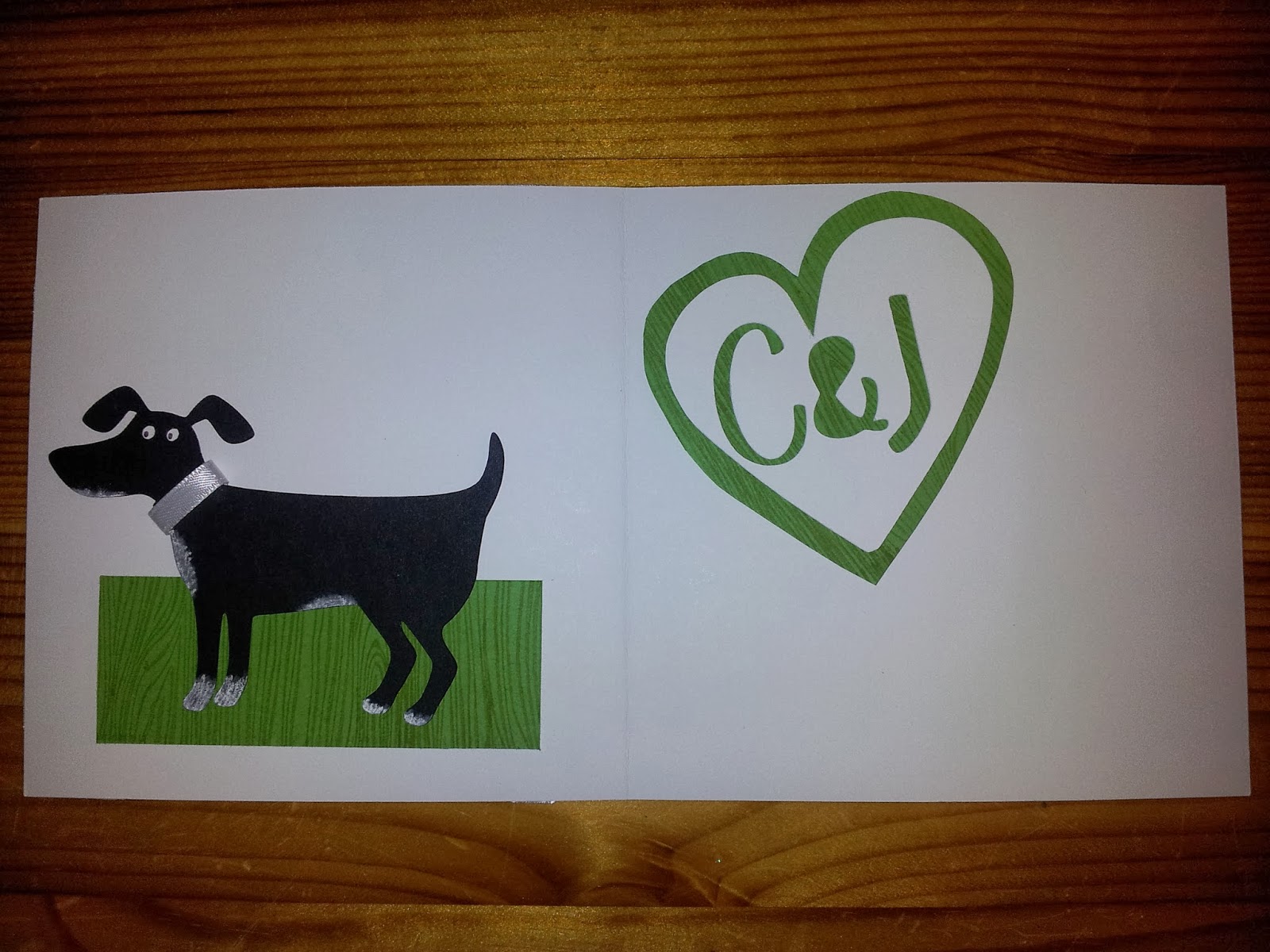 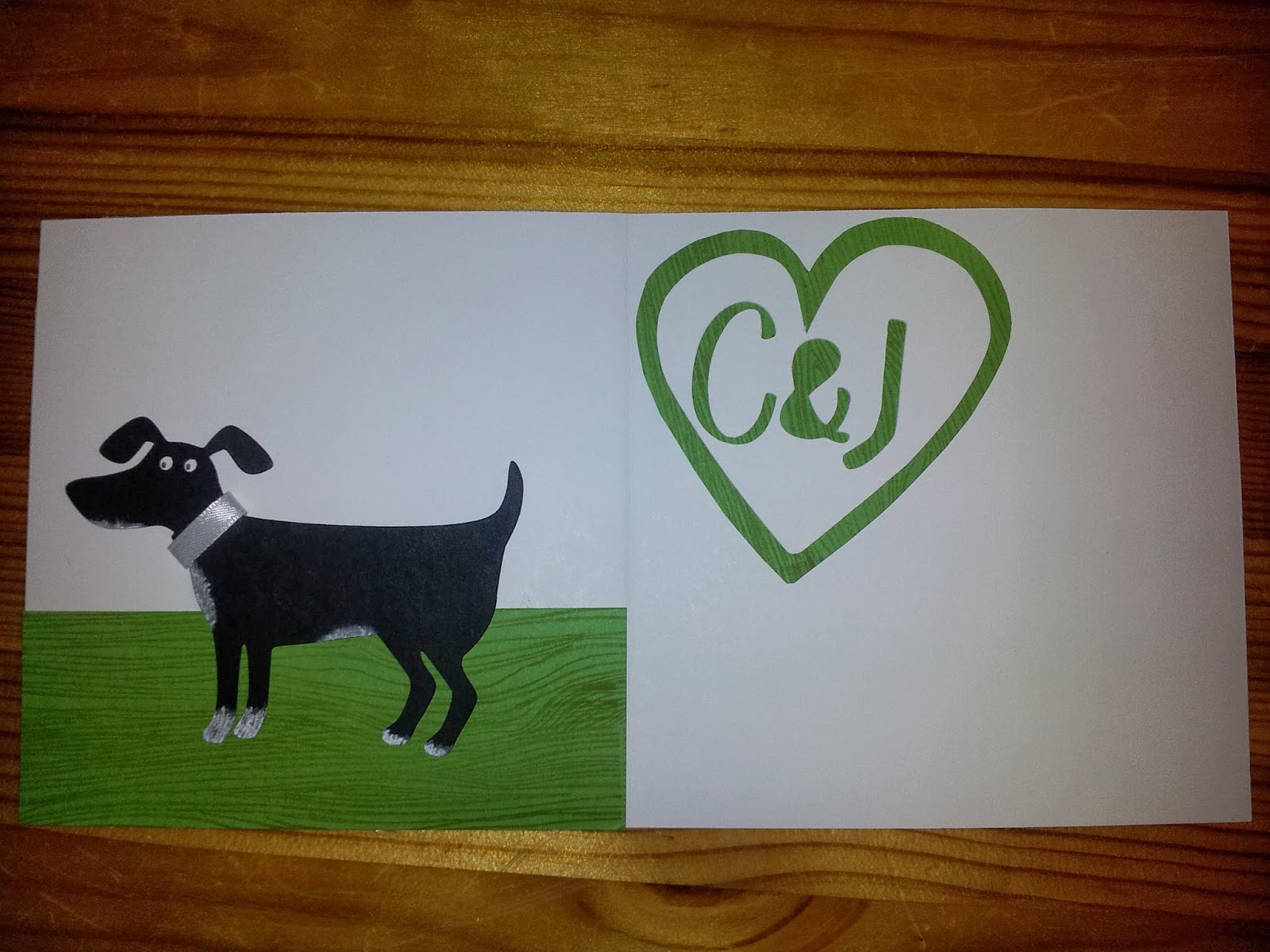 Now for work on the front... what to do? 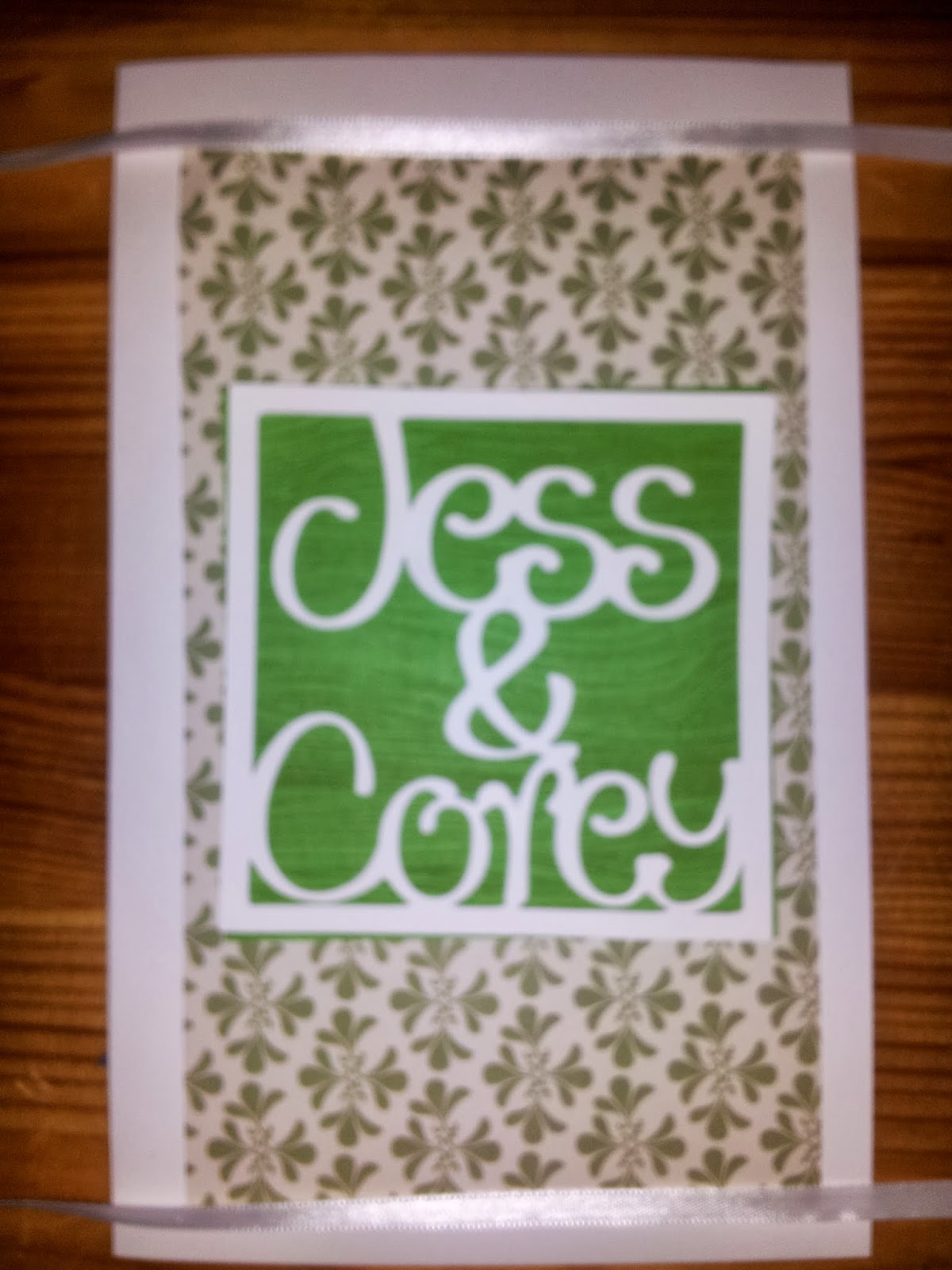 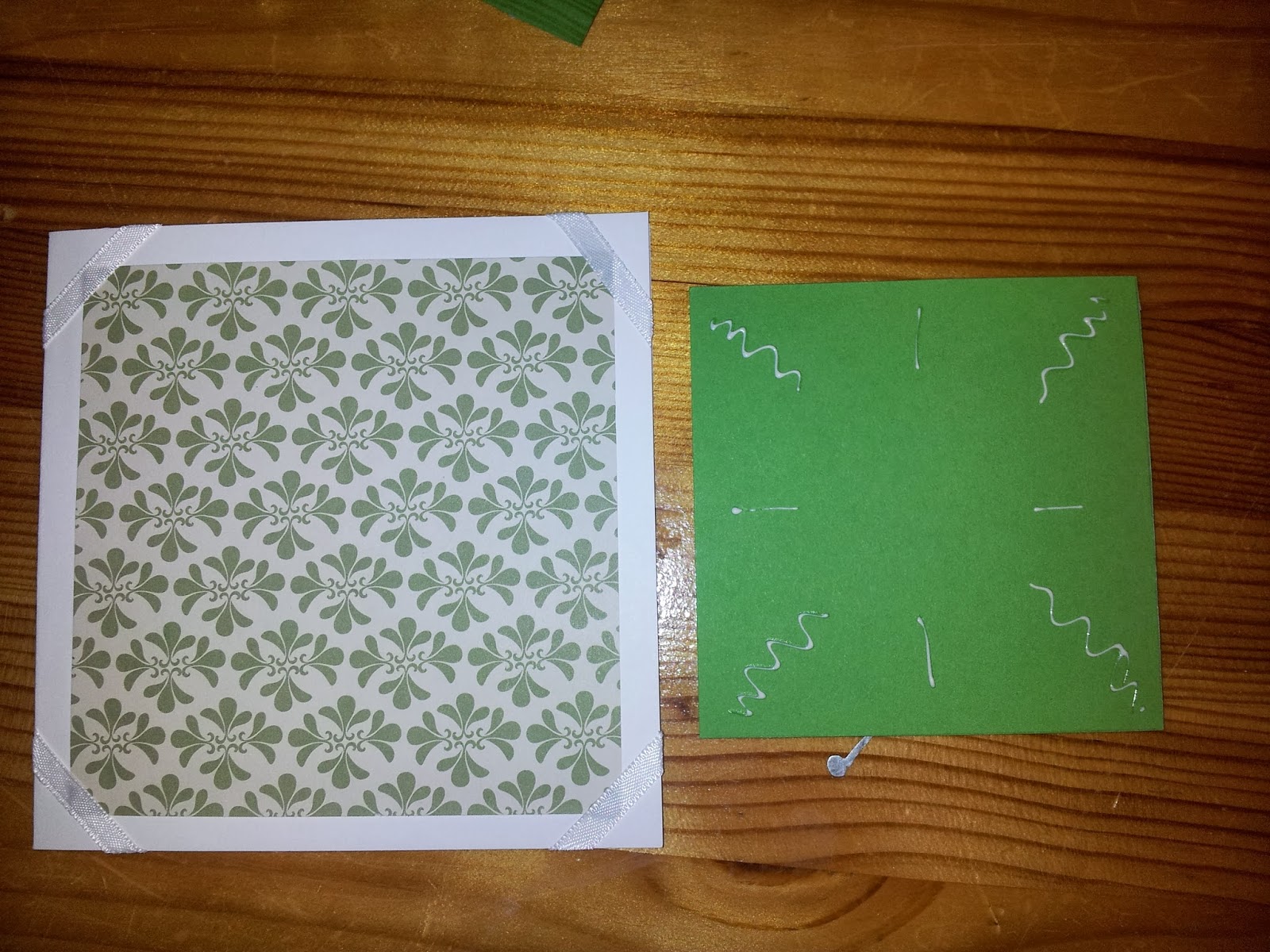 Do I want ribbon or gems? 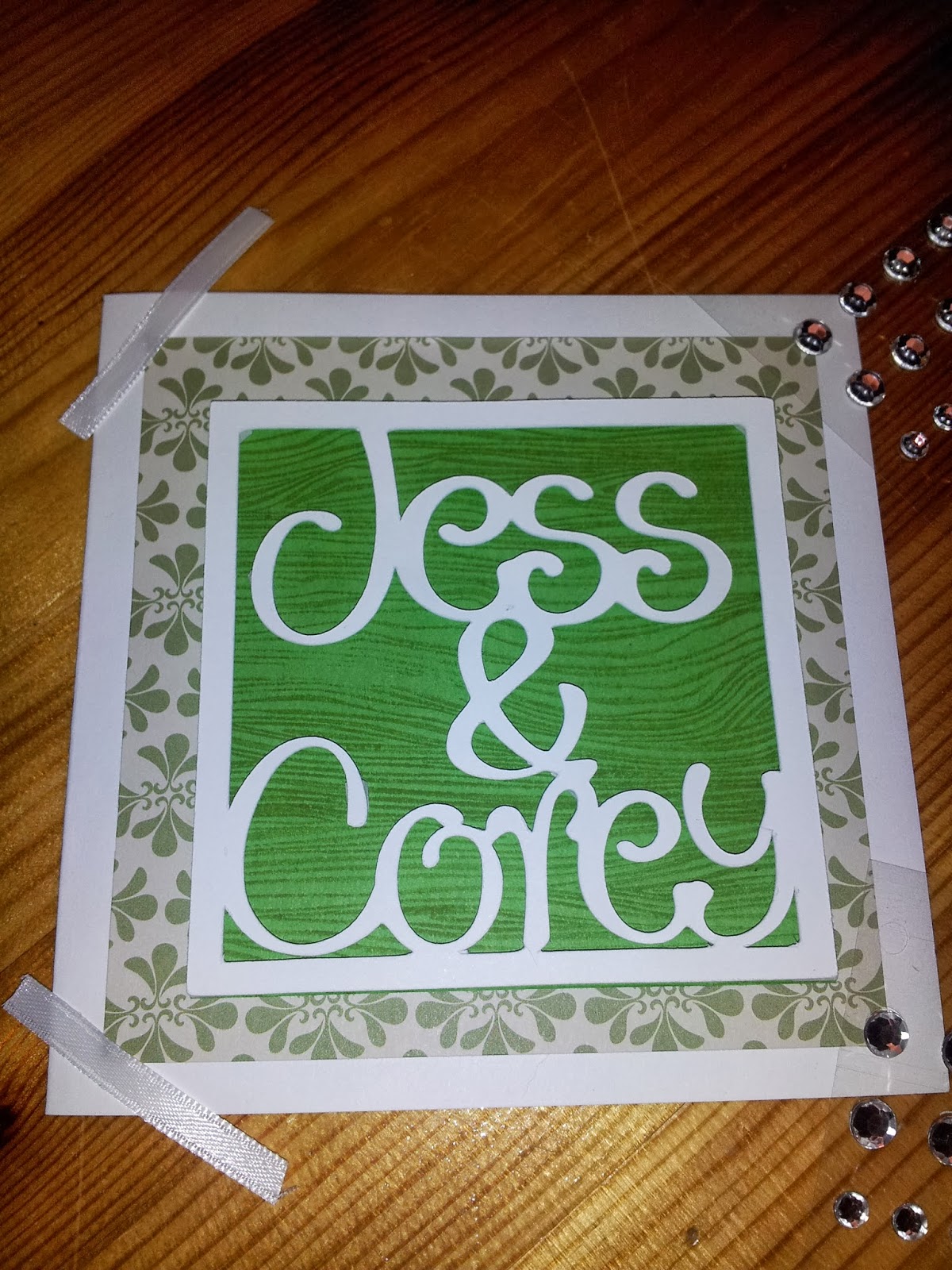 Close up view of the use of pop-up dots. 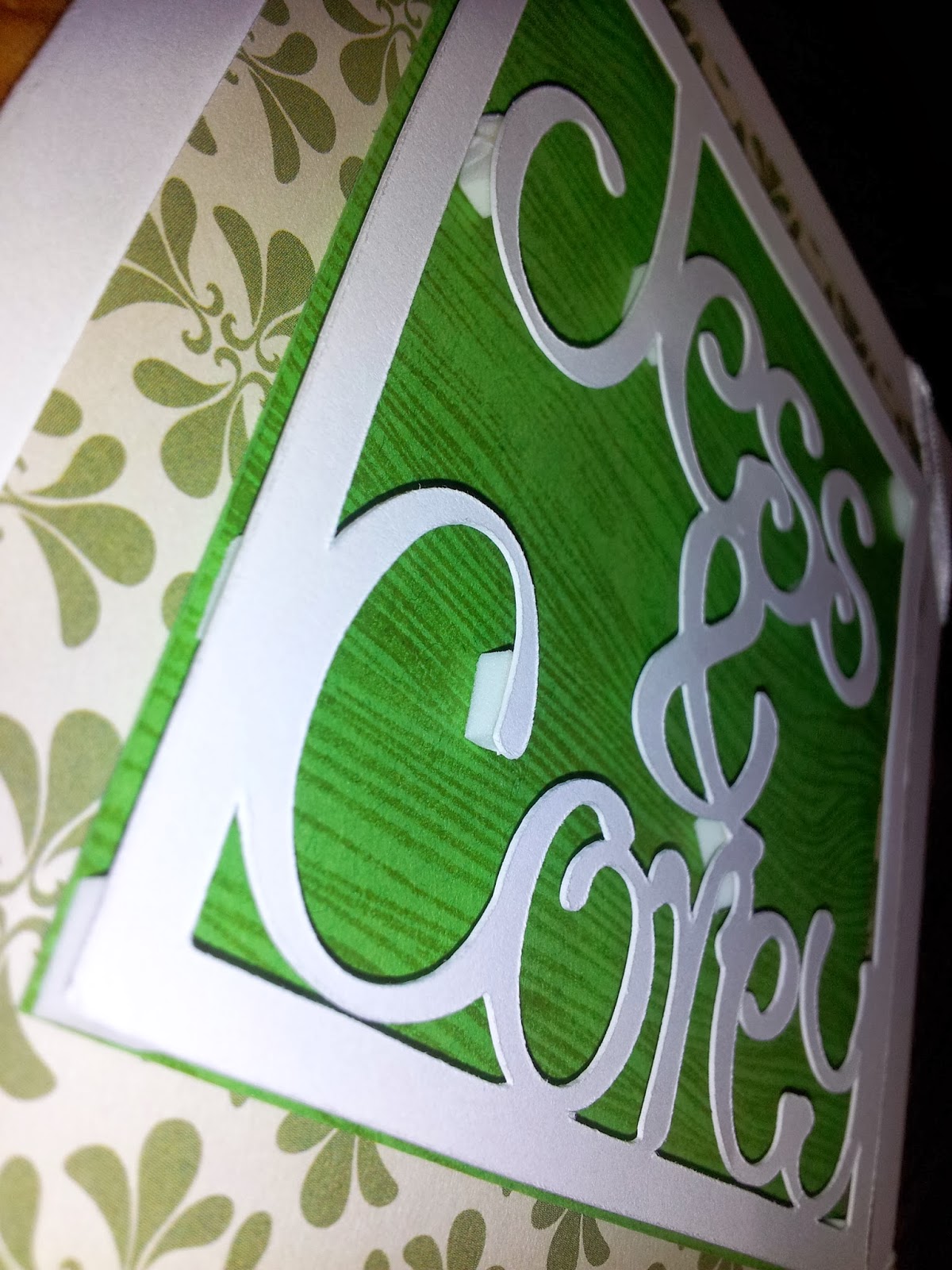 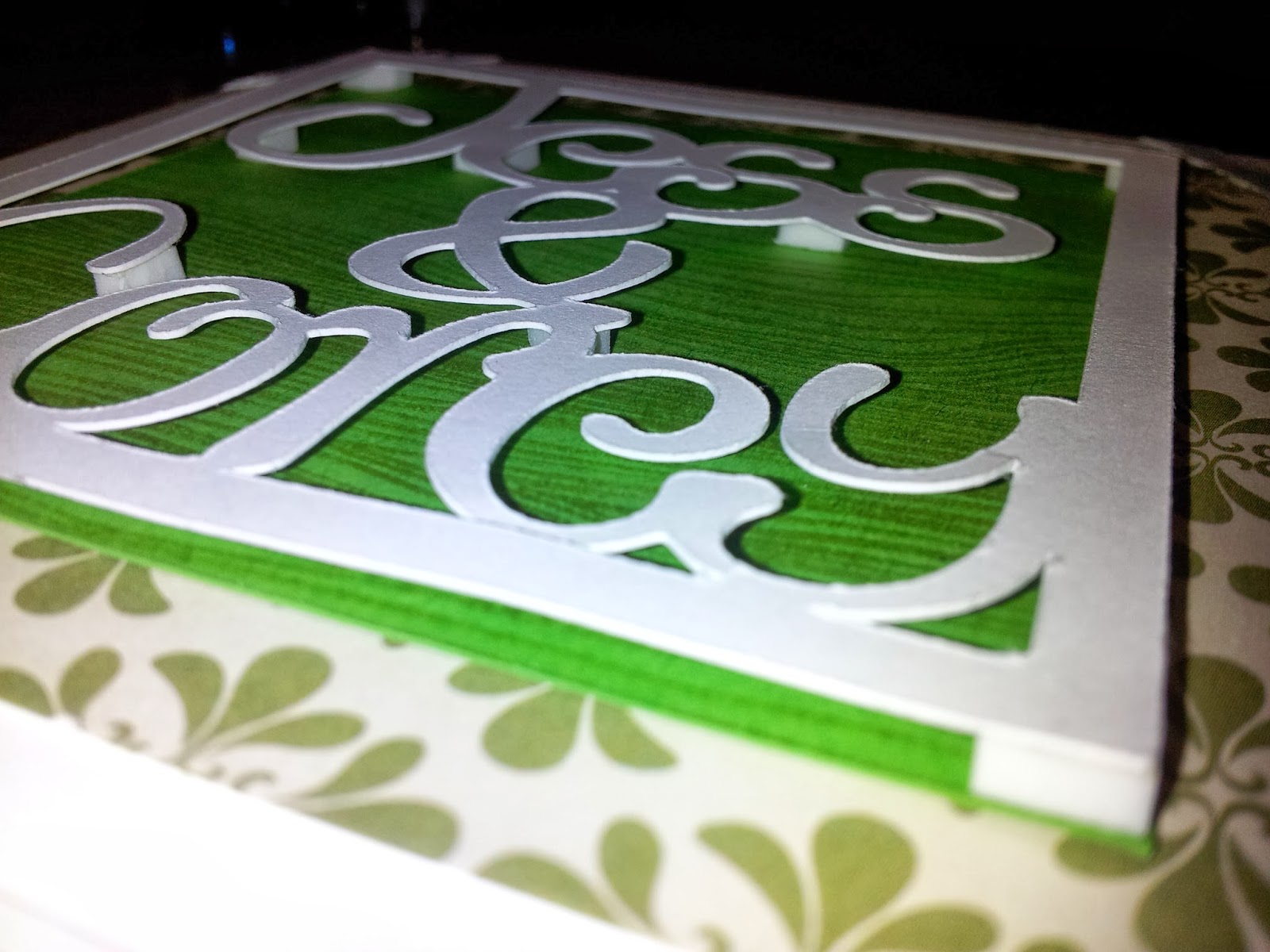 Taaa-Daaa!
The final front of the card! 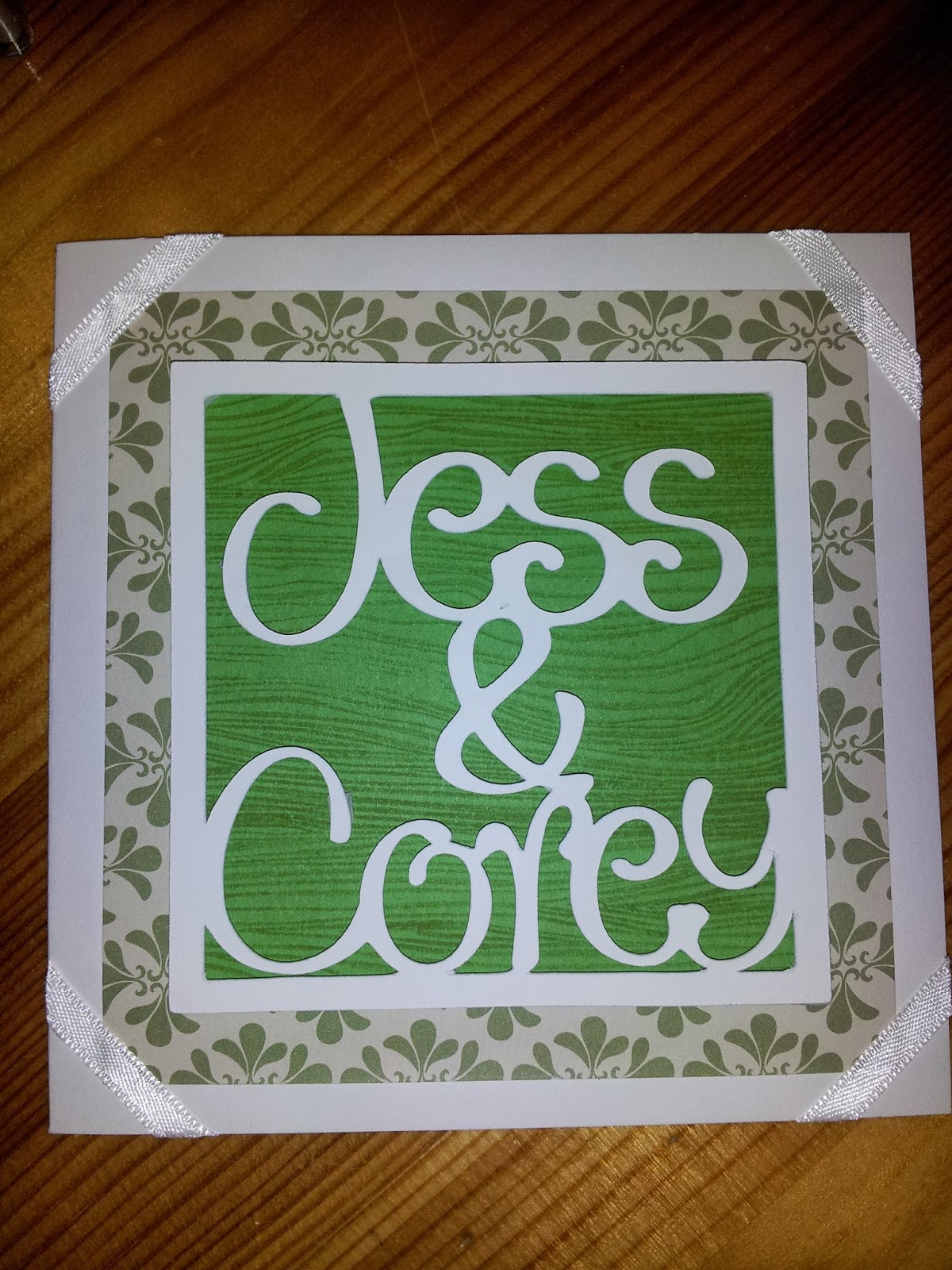 Taaa-Daaa!
The final inside of the card. 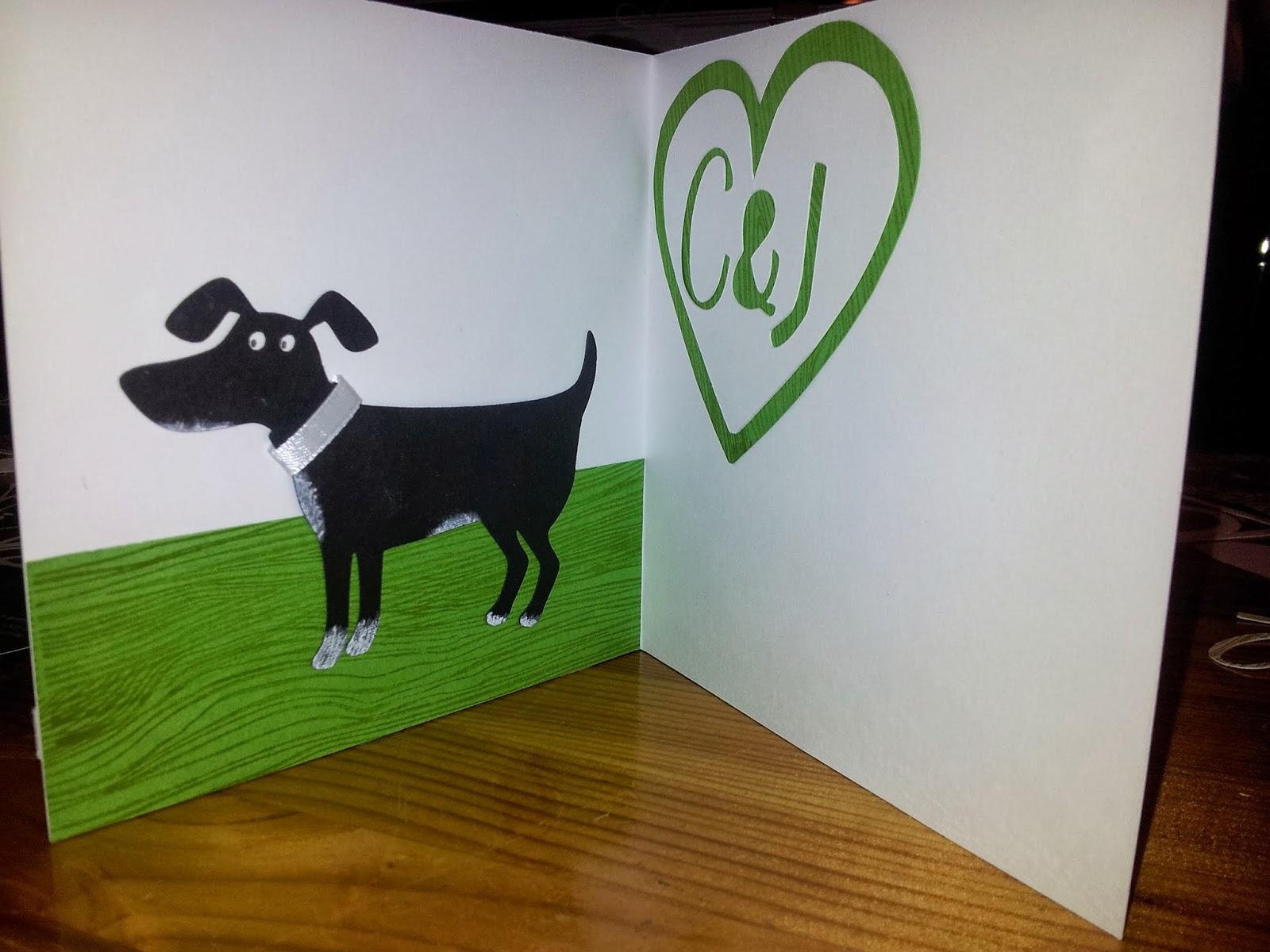 I used the dog as a money holder since we did a small gift including some money.  The dog was only attached on the feet, tail and under the head.
I also made an envelope since I had lots more personalized pieces for them. 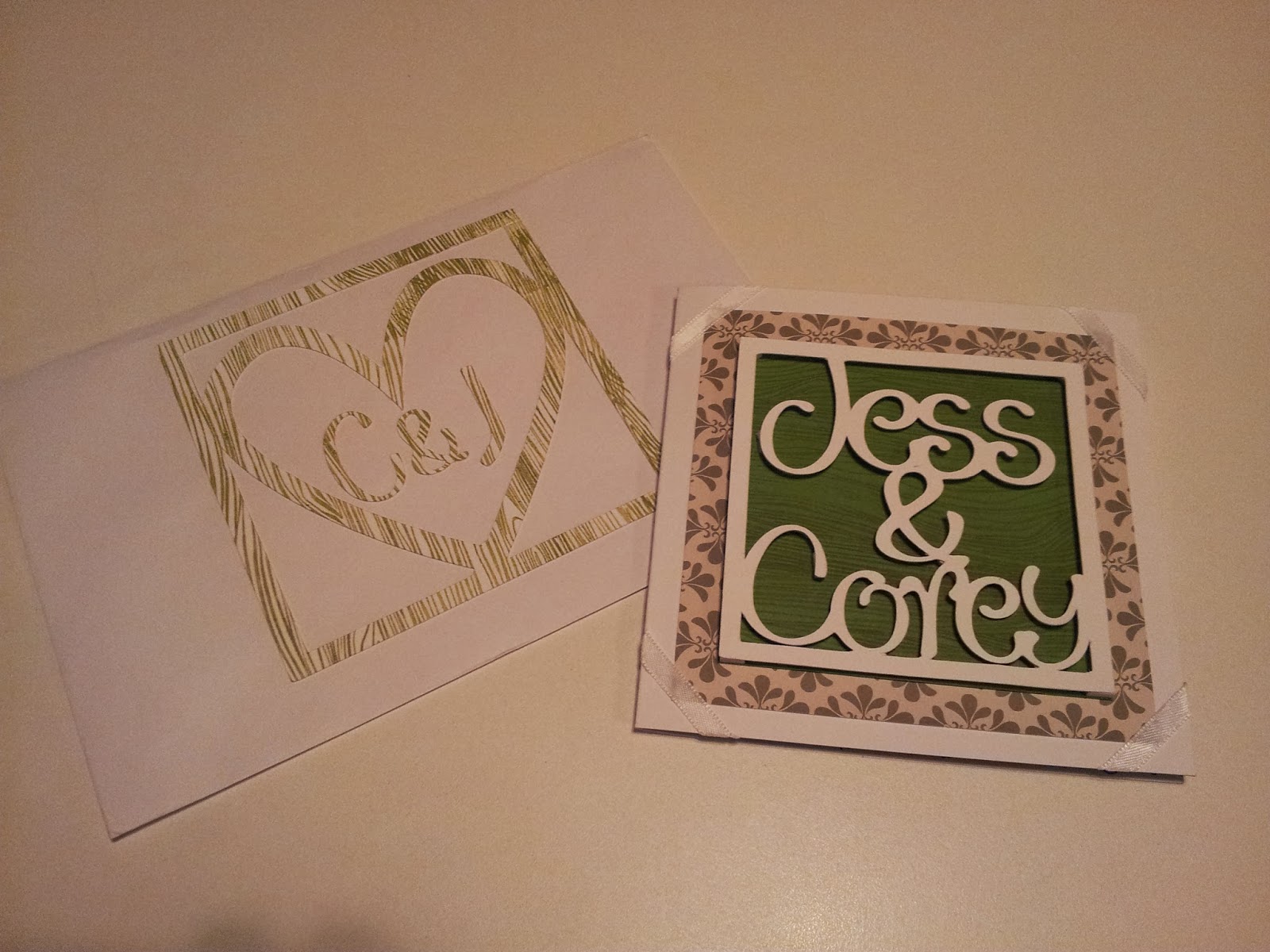 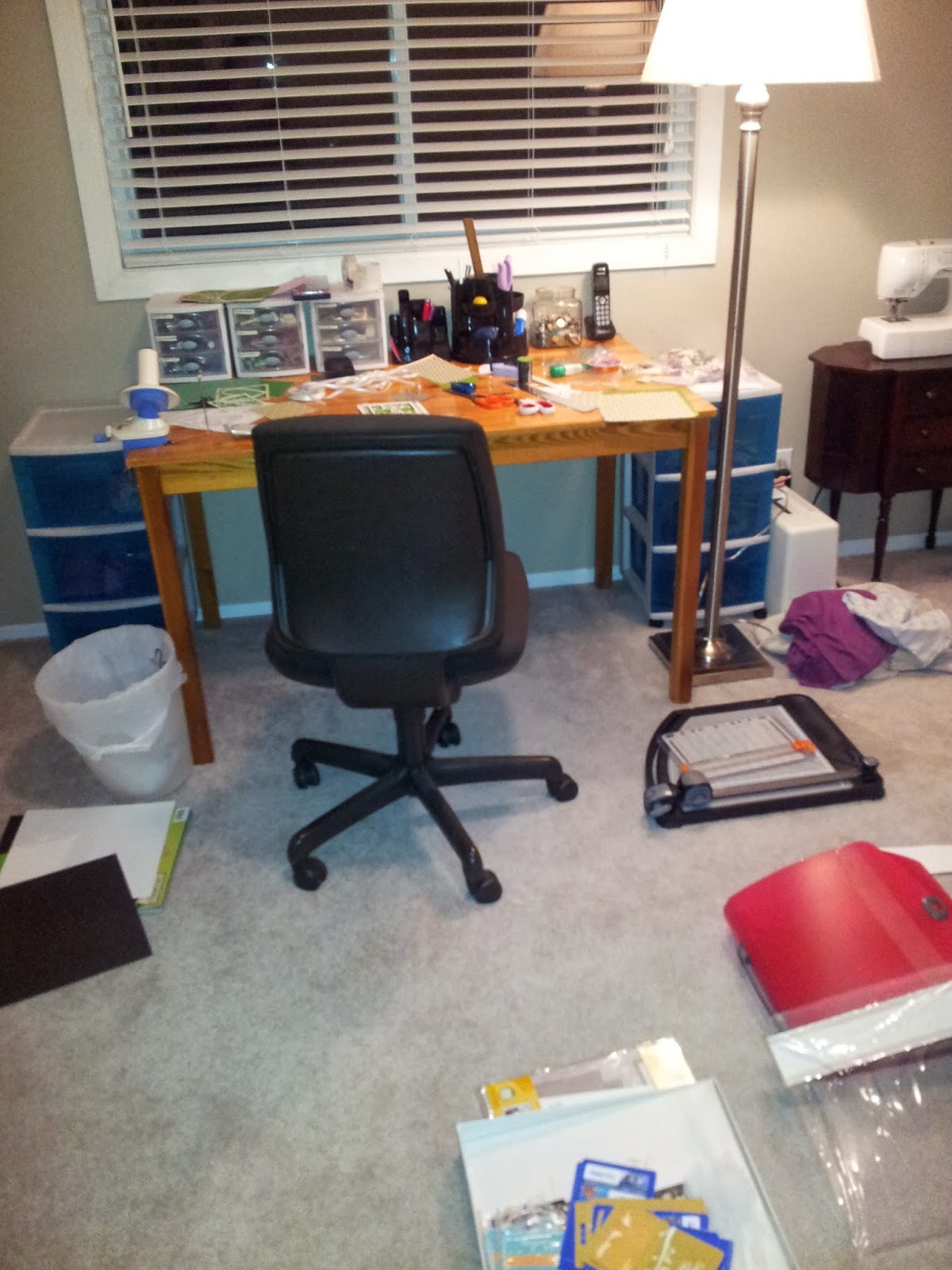 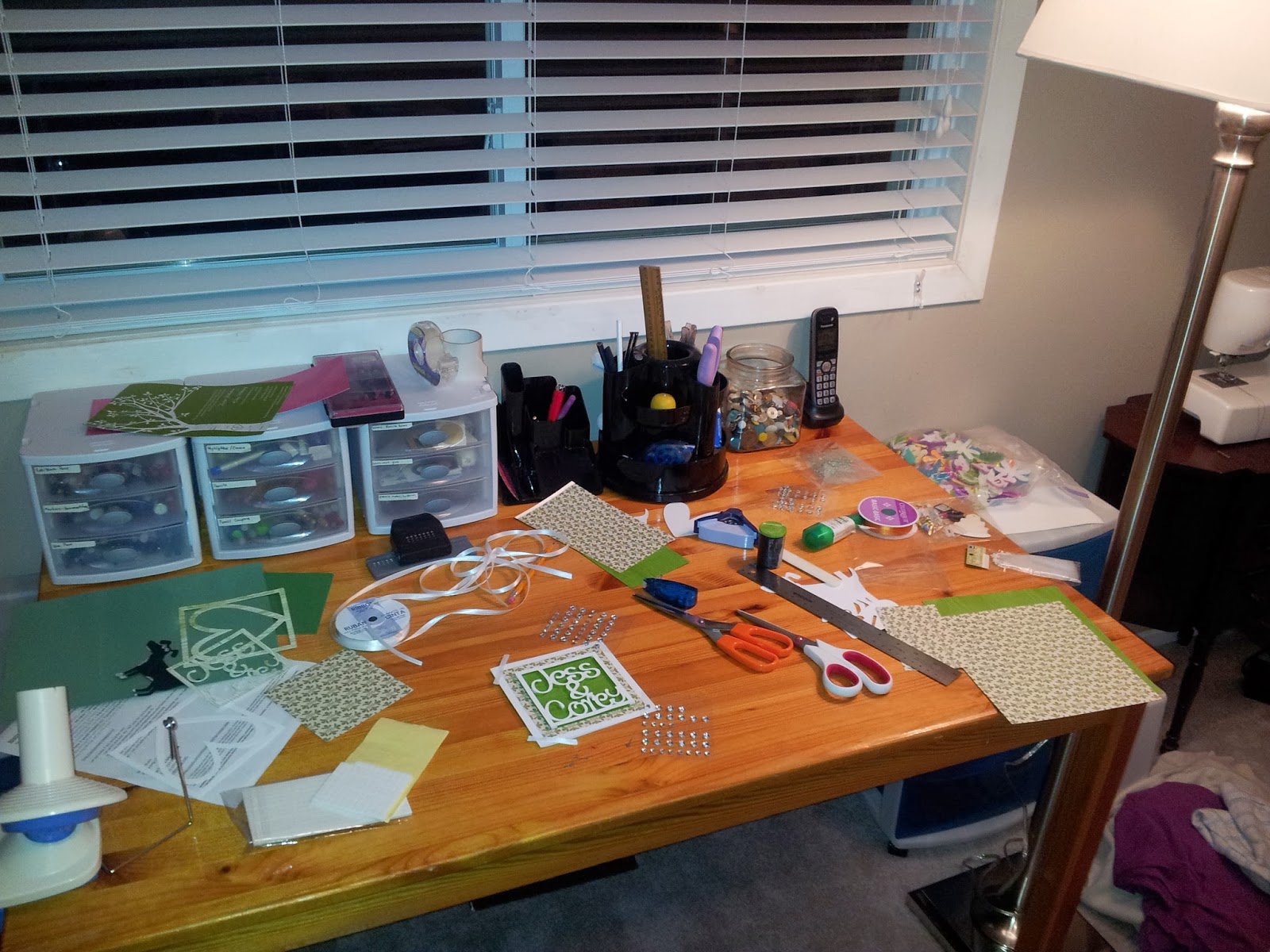 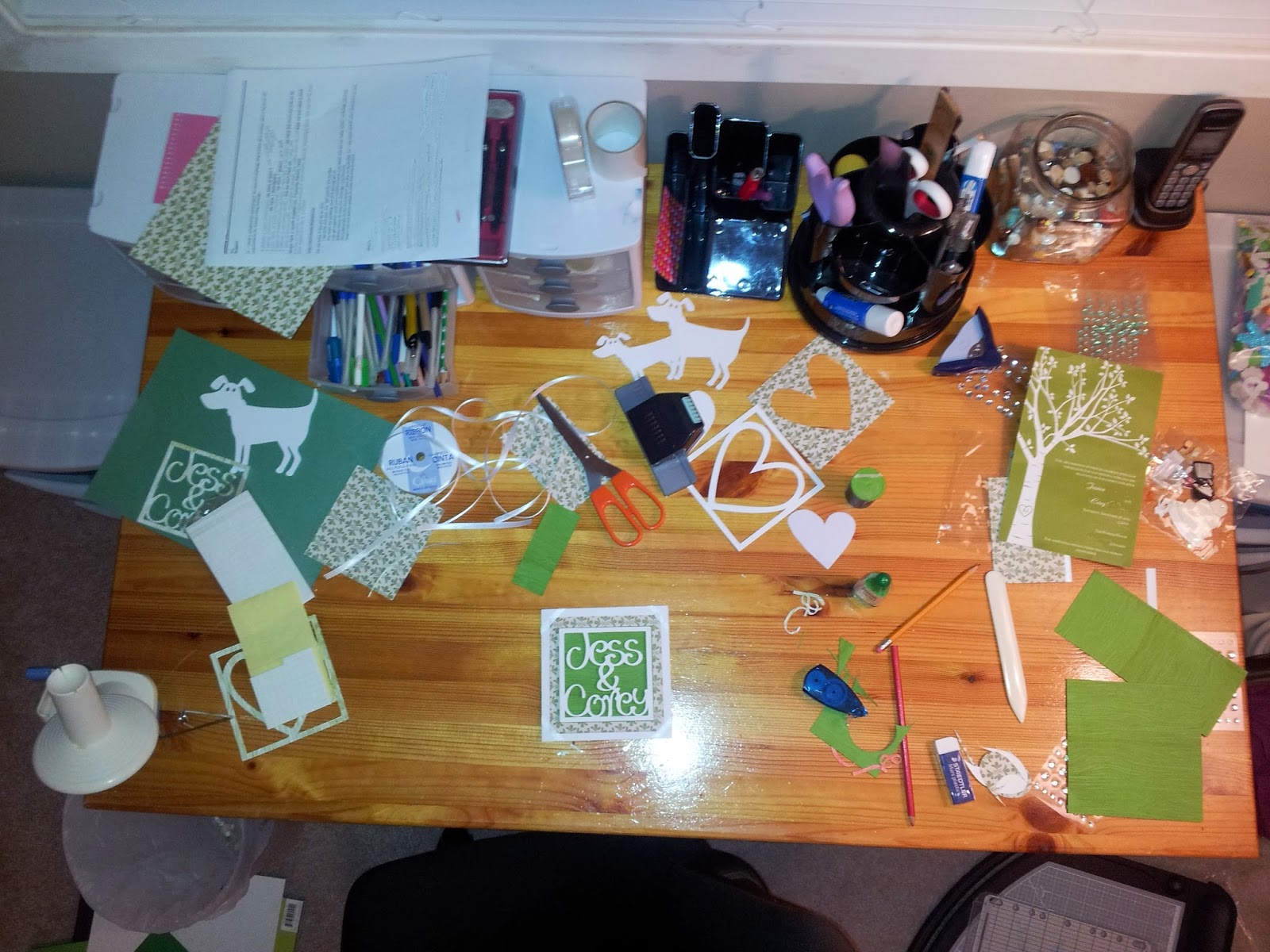 Since the challenge is to use as much as you can... here are my little garbage scraps (added an eraser in the picture to give perspective) 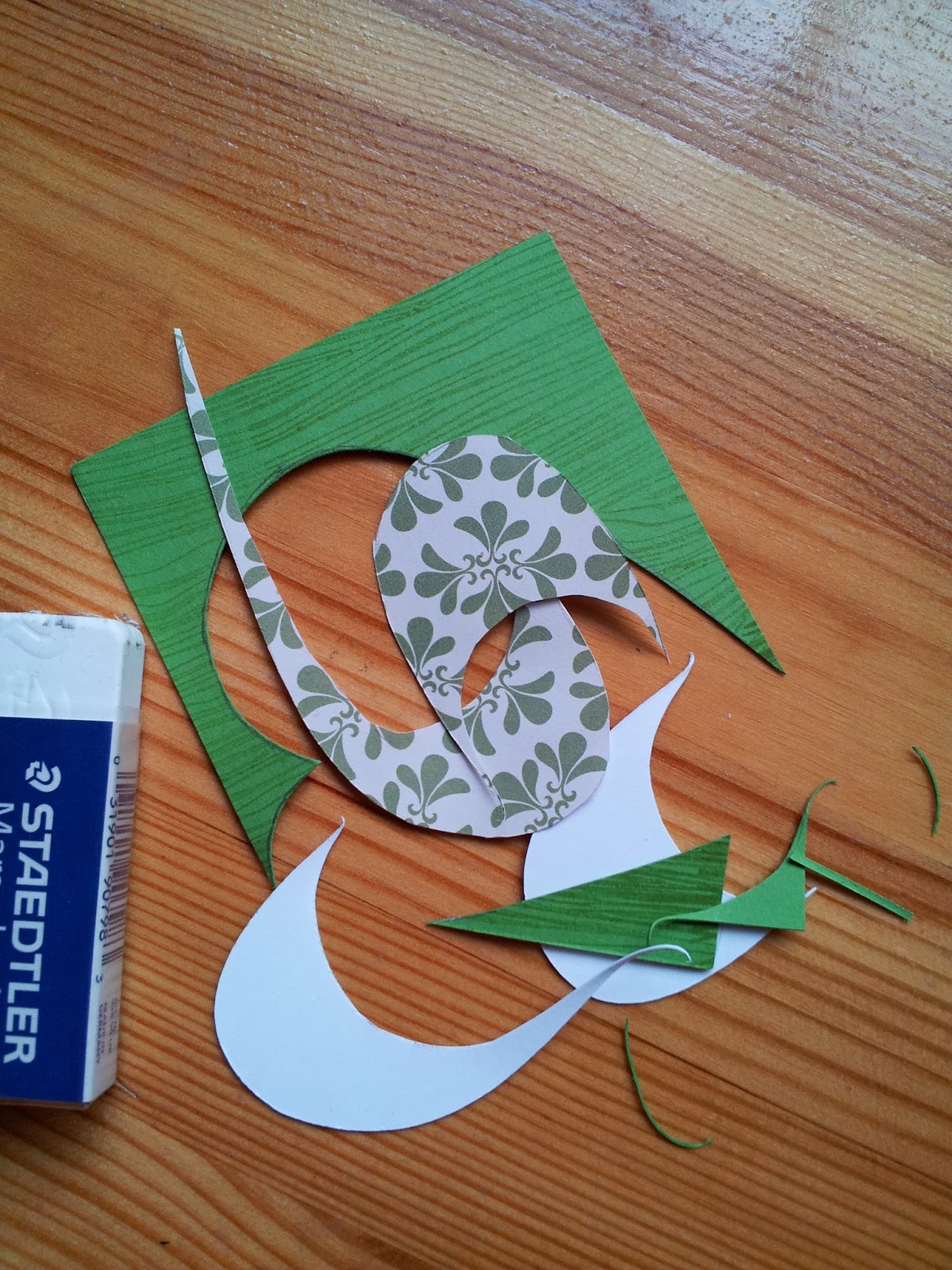 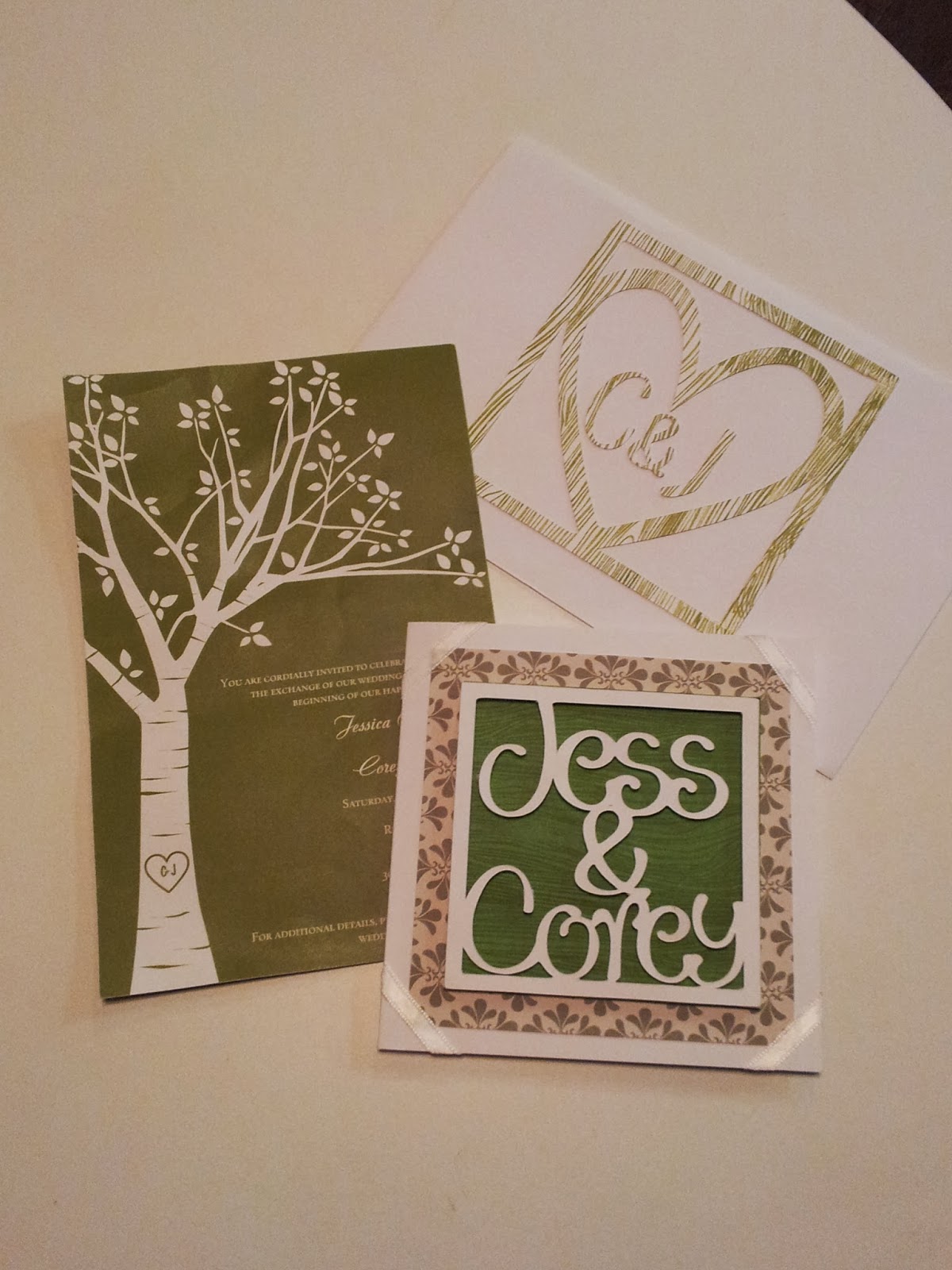 If you are interested in checking out
other crafty blogs take a look at this list.
﻿﻿﻿﻿﻿﻿﻿
﻿
﻿﻿﻿﻿﻿﻿﻿
Posted by Unknown No comments:
Email ThisBlogThis!Share to TwitterShare to FacebookShare to Pinterest
Older Posts Home
Subscribe to: Posts (Atom)